Sons of Sun – Two rock and roll plays about Sun Records, Memphis, and the artists that started their careers there.

In the mid 1950s, Sam Phillips’ discovery of Elvis and the subsequent invention of rock and roll made Sun Records the most famous record label in the world. The Australian play, Sons of Sun – Elvis, Jerry-Lee, Johnny and Me tracks that journey and the glory of the music created at Sun Studios. Much like the famous label itself, the first Sons of Sun play rose from humble beginnings. It started at the Sydney Fringe Festival in 2012 and has gone on to great success with multiple seasons at the Sydney Opera House and many successful regional and interstate shows.

In 2019, a companion play, Sons of Sun – Elvis and the ‘77 Comeback Special, has been created.  It picks up two decades later. It is 1977 and with the death of Elvis, Sam Phillips reflects on the music that came out of his little studio in Memphis, and the career highs and lows of Elvis, Roy Orbison, Jerry-Lee Lewis, Johnny Cash and Carl Perkins after their golden era at Sun Records. Sam is pressed to re-assess the value of the Sun Records legacy when he’s challenged by Julie, a young but already jaded British new music writer, sent from punk-era London to do a feature story on the death of rock and roll.

Sons of Sun – Elvis, Jerry-Lee, Johnny and Me by Kieran Carroll

Told through the character of its founder Sam Phillips, his assistant Marion Keisker, and the famous musicians that Sam recorded, the show features a three piece live band fronted by John Kennedy with Murray Cook on guitar and Paul Scott on bass, performing thirty-five songs from Elvis, Johnny Cash, Carl Perkins, Jerry Lee Lewis, Roy Orbison and many more.

Sydney musician John Kennedy, a co-creator and lead musician in the original Sons of Sun play, has teamed with international playwright Michael O’Brien to create this new show.

The pivotal role of the middle aged Sam Phillips is played by Australian film and theatre legend Terry Serio. Terry’s long list of credits include playing Bob Hawke and John Howard in Keating!, Keith Richards in A Riff on Keef and his AFI nominated role as Johnny O’Keefe in Shout!

After his critically acclaimed La Mama sell out season of The Giraffe’s Uncle, director Ron Hadley returns to the Sydney stage to beautifully blend the life, loves and regrets of Sam Phillips and 22 brilliant songs from Elvis and the other famous Sons of Sun.

With the sparks flying between Sam and Julie, Sons of Sun – Elvis and the ‘77 Comeback Special charts the death of Elvis and the rebirth of Sam Phillips’ determination to create a legacy for the musical revolution that he kicked off with the Sun Records Class of ’55. 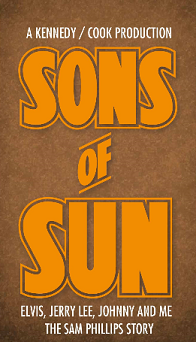